The first photos have emerged of crammed US cargo jets with hundreds of terrified Afghan refugees on board after they ran onto the aircraft before military personnel could close ramps on them on Sunday in their escape of the Taliban.

The US has so far flown at least two C-17 cargo jets out of Kabul and more flights are expected throughout Monday night and later this week despite chaos on the ground on Monday which involved eight people dying and flights being halted.

On Sunday, one of the first flights out was the US Air Force C-17 numbered RCH 871, which flew from Kabul to Qatar.

As it was preparing to take off on Sunday, hundreds of terrified Afghan nationals ran onto the plane, up the ramp, and settled on board.

A photo obtained by Defense One shows them all lined up, sitting on the floor of the plane that is fitted to carry 150 soldiers comfortably, but can take 171,000lbs of cargo.

Initially, audio from on board to an air traffic controller suggested there were 800 on board but Defense One says the true number was 640.

The refugees – including many women and young children – ran onto the plane’s half-open ramp before take-off and ‘the crew made the decision to go’, taking them with them, an unnamed defense official said.

‘Approximately 640 Afghan civilians disembarked the aircraft when it arrived at its destination,’ the official said.

Despite eight people dying at the airport on Monday and amid criticism the fall of the city is reminiscent of the fall of Saigon, President Biden defended his decision to withdraw US troops suddenly, saying he would no longer sacrifice American lives in an Afghan civil war.

He has been widely condemned for how he has withdrawn the US’s support after 20 years of helping Afghan forces stabilize the region.

Biden briefly interrupted his vacation from Camp David on Monday to give a short address to the nation about the ongoing catastrophe in Kabul.

‘We gave them every chance but we couldn’t provide them with the will to fight,’ he said.

He has been universally condemned for his response, with some of the fawning American media that idolized him a week ago, calling his decision to ‘wash his hands’ of the situation ‘one of the most shameful’ policy decisions in modern history. 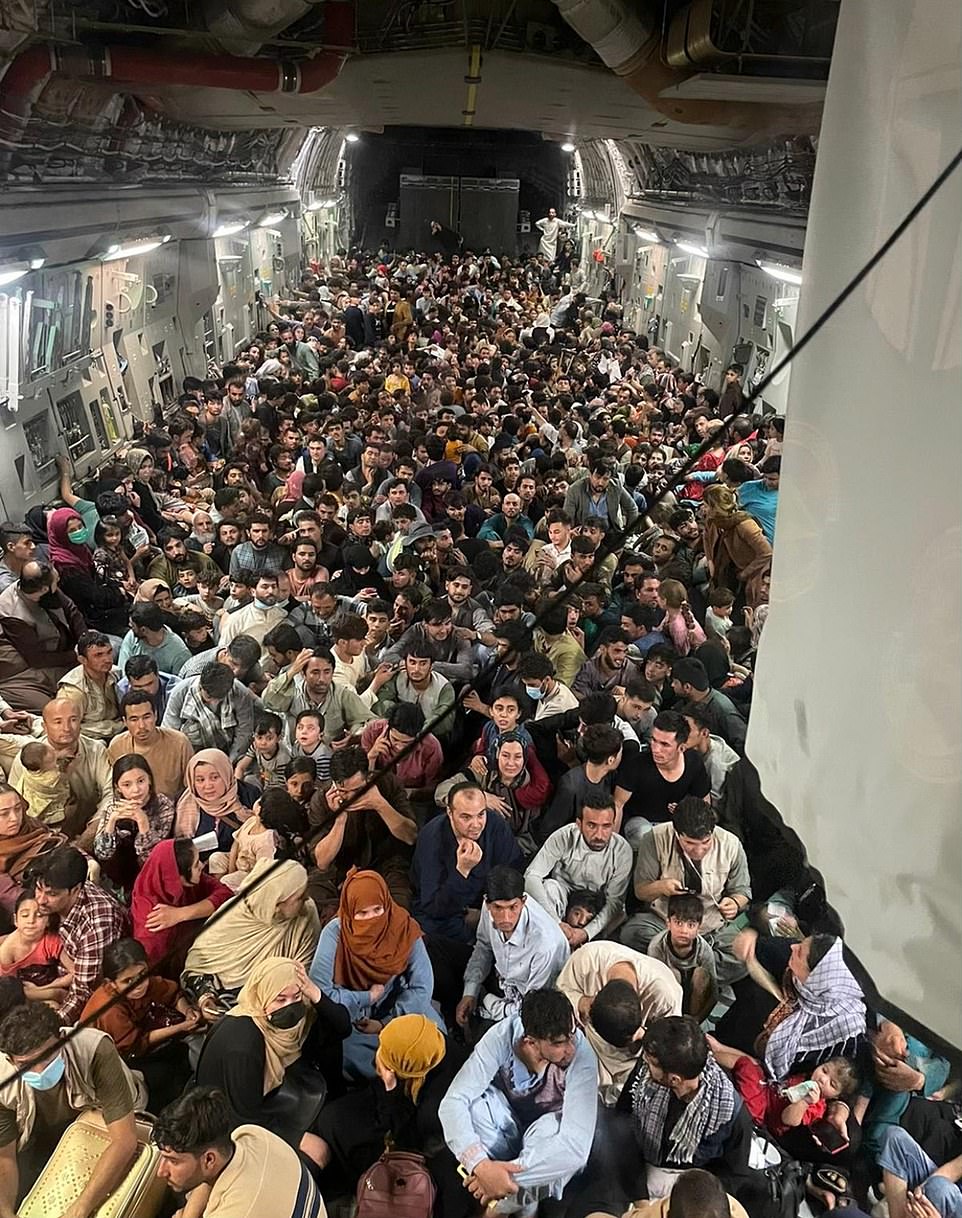 A C-17 jet carrying 640 Afghan refugees that left Kabul on Sunday night as the Taliban claimed the city. The flight landed in Qatar. The refugees ran up the half-open ramp while US forces were preparing for take-off, according to an unnamed defense official cited by Defense One on Monday. At least one other C-17 has departed the area 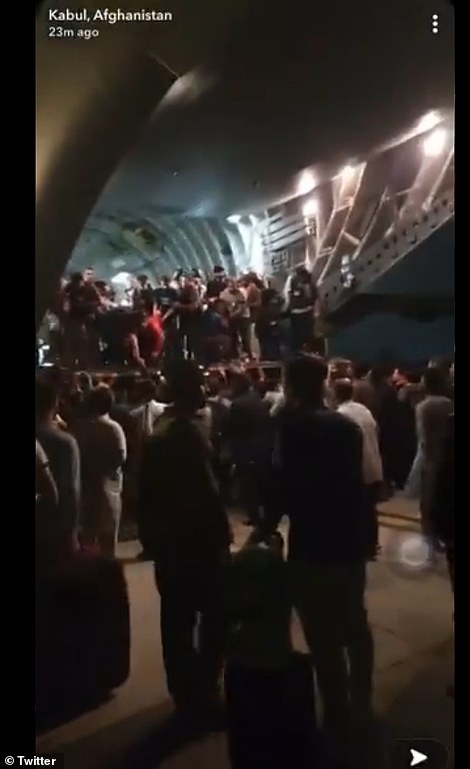 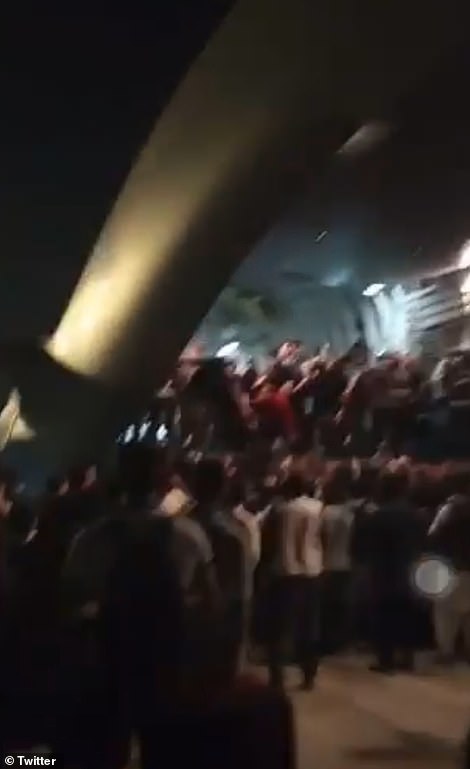 Video shows hundreds of refugees running onto the C-17 on Sunday night before it took off. There are thousands of desperate Afghans still on the ground in Kabul

Major General Hank Taylor said at a press conference on Monday afternoon that US forced are ‘actively monitoring’ the situation.

One C-17 flew out of Kabul on Monday that was carrying US Marines, he said. Another is in the air currently and is scheduled to land shortly.

One – plane number RCH 885 – flew out of Kabul with desperate Afghan nationals clinging on to the fuselage on Monday. Three fell to their deaths.

Pentagon Spokesperson John Kirby said the situation at the airport wasn’t a ‘failure’ despite thousands of Afghans flooding the airfield and US troops shooting dead two armed Afghan nationals.

‘When you look at the images out of Kabul… that would have been difficult for anyone to predict,’ he said. 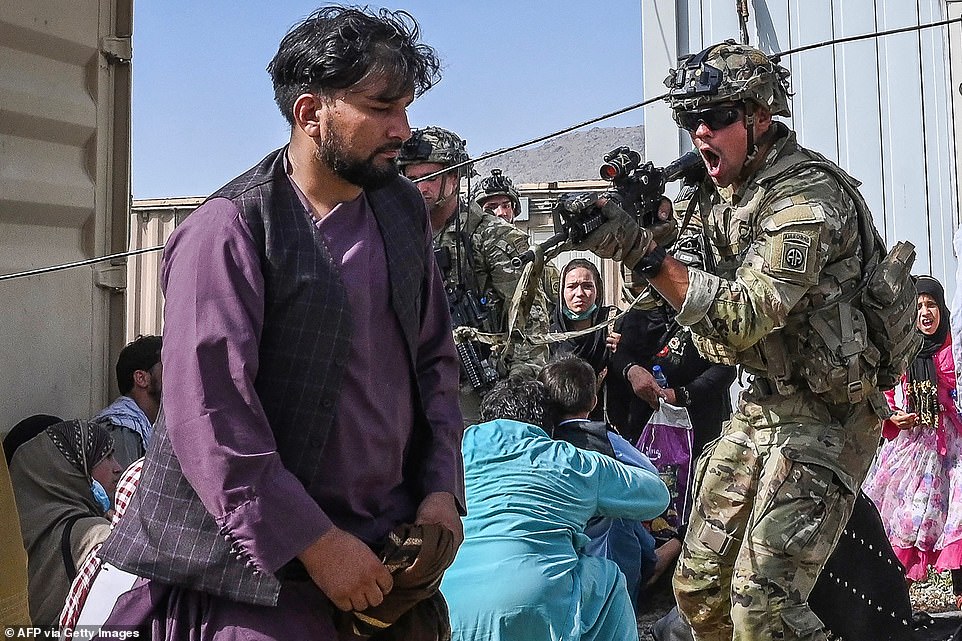 A US soldier points his gun towards and bellows at an Afghan civilian at the Kabul airport on Monday. Two armed Afghans have been killed by American troops at the airport