Three stowaways ‘fall to their deaths from plane’ and five are killed at airport as increasingly desperate Afghans climb on MOVING US Air Force jet as they flee from Taliban: All US Embassy staff have now been evacuated

Three stowaways are believed to have plunged to their deaths, with footage showing bodies falling from the underside of a hulking USAF transport jet as it climbed into the skies over the fallen city on Monday. Further images later showed mutilated corpses strewn across a rooftop.

Separate video showed hundreds chasing after a USAF C-17 transport jet as it hurtled down the runway, and other pictures showed a crowd darting beneath another American jet as it prepared for takeoff at Hamid Karzai International Airport.

U.S. soldiers earlier fired warning shots into the air to deter people from forcing their way onto a plane that was due to evacuate American diplomats and embassy staff out of the fallen city.

‘The crowd was out of control,’ a U.S. official told Reuters. ‘The firing was only done to defuse the chaos.’

One witness, waiting for a flight out for more than 20 hours, said it was unclear if the five had been shot or killed in a stampede.

Joe Biden has yet to speak publicly about the humiliating foreign policy disaster which looks set to become a defining feature of his legacy.

The President blamed Donald Trump for the calamity in a statement on Saturday, which was condemned in a Wall Street Journal Op-Ed as ‘one of the most shameful in history by a Commander in Chief at such a moment of American retreat.’

The chaos, reminiscent of the evacuation from Saigon in 1975, comes after the Taliban declared victory from the presidential palace on Sunday following a blistering advance across the country after a hasty U.S. retreat.

One of the terror chieftains claimed proudly, ‘Praise God, I was in Guantanamo for eight years’, as he sat at the president’s table surrounded by henchmen strapped with AK-47s.

British Prime Minister Boris Johnson said on Sunday that the U.S. decision to withdraw had ‘accelerated’ the crisis that risked creating ‘a breeding ground for terror.’

However, the Taliban has been on a charm offensive, pledging that no harm will come to any foreign citizens or embassy staff as it seeks formal recognition from the international community.

Almost all major checkpoints in Kabul were under Taliban control by Monday morning and Afghanistan’s Civil Aviation Authority issued an advisory saying the ‘civilian side’ of the airport had been ‘closed until further notice’ and that the military controlled the airspace.

US troops are guarding the airport and have taken over air traffic control, but all non-military flights are grounded. Early Monday morning, flight-tracking data showed no immediate commercial flights over the country.

The last U.S. officials were flying out of the country today as: 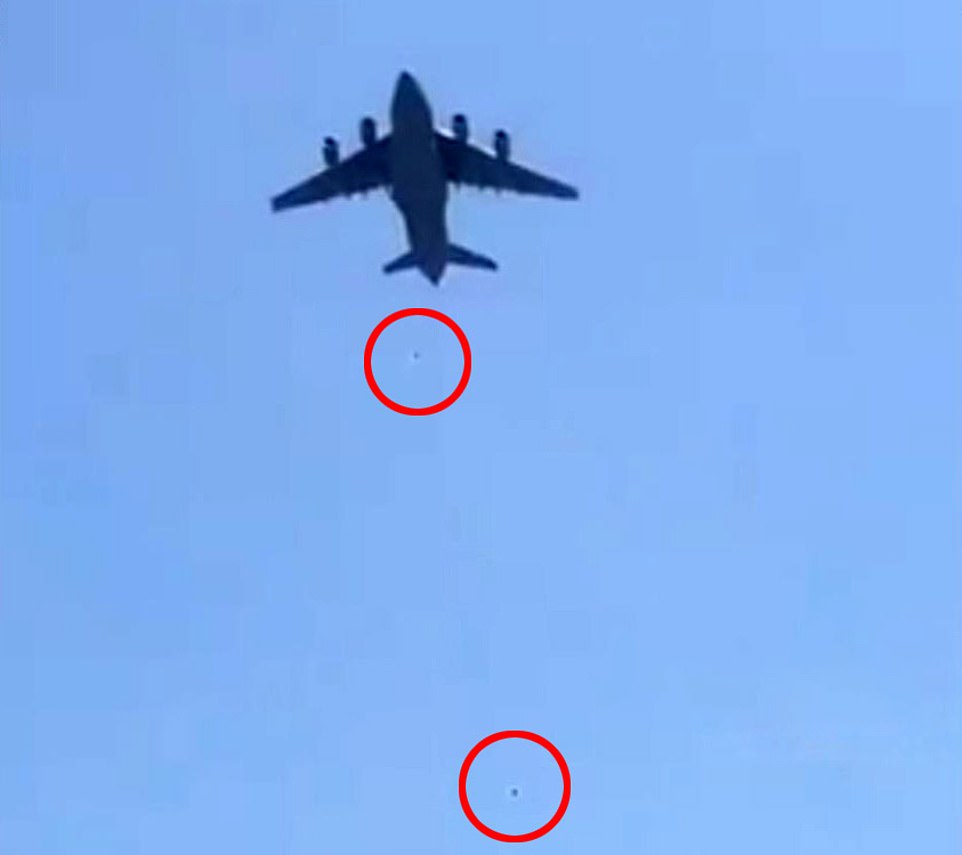 Three stowaways are believed to have plunged to their deaths, with footage showing bodies falling from the underside of a hulking USAF transport jet as it climbed into the skies over the fallen city on Monday. 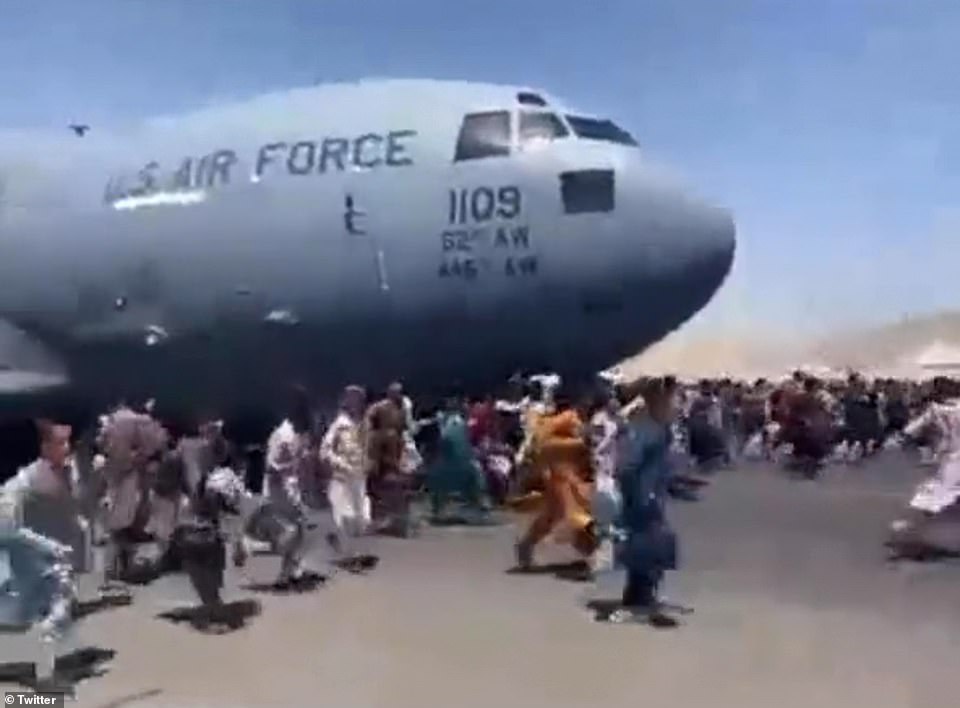 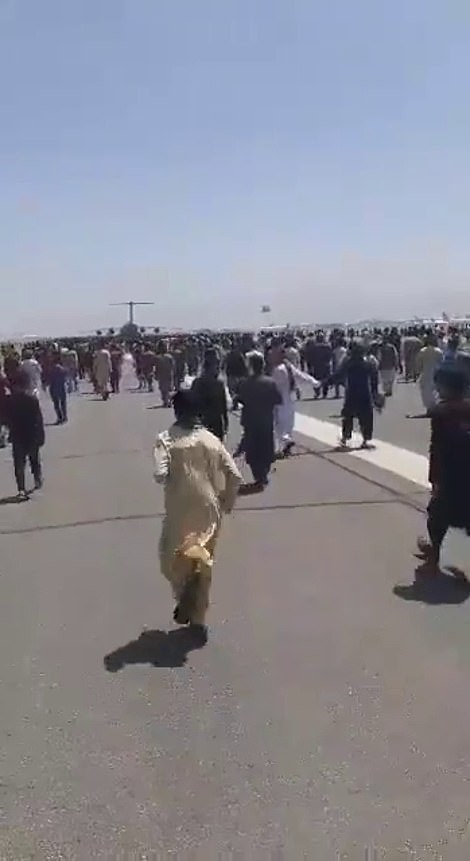 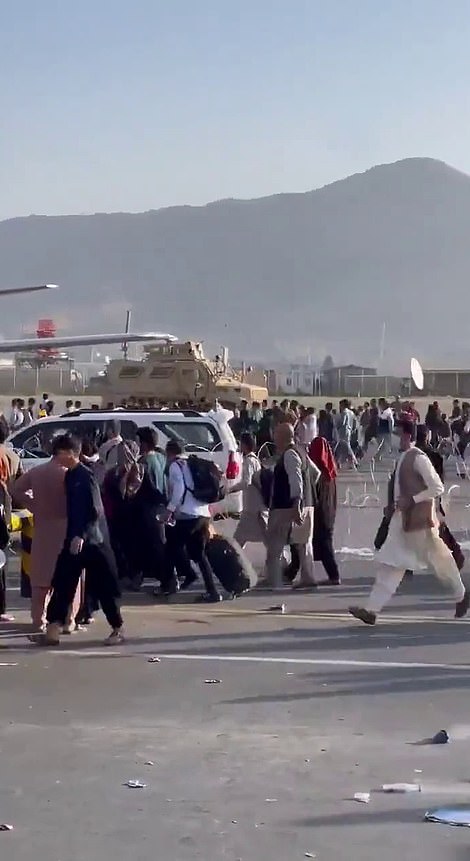 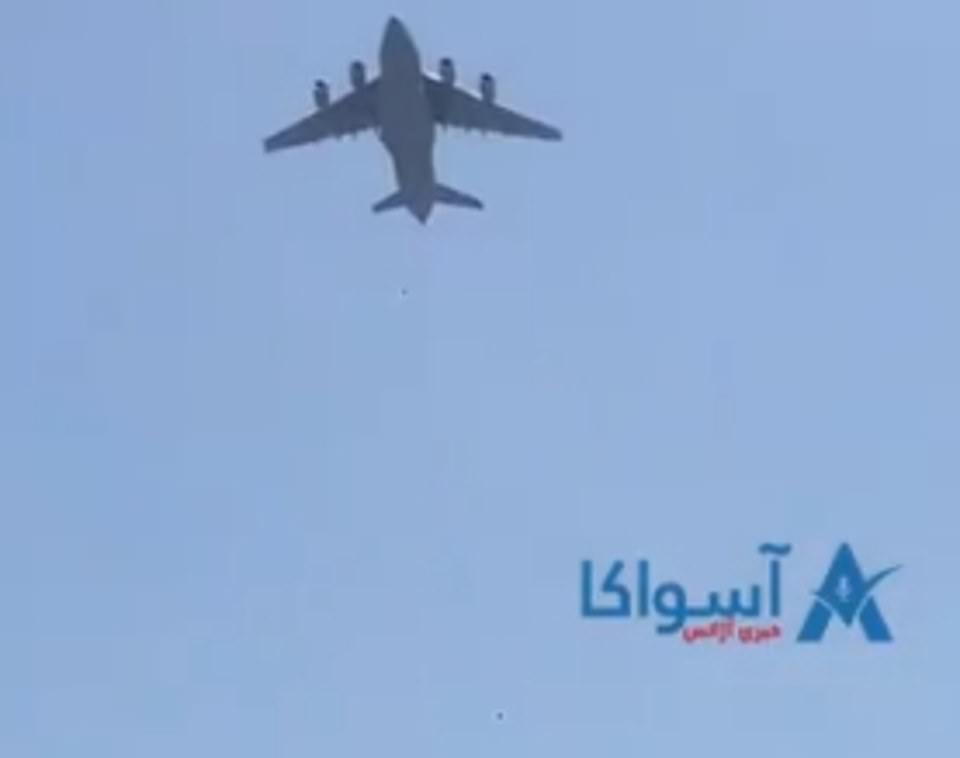 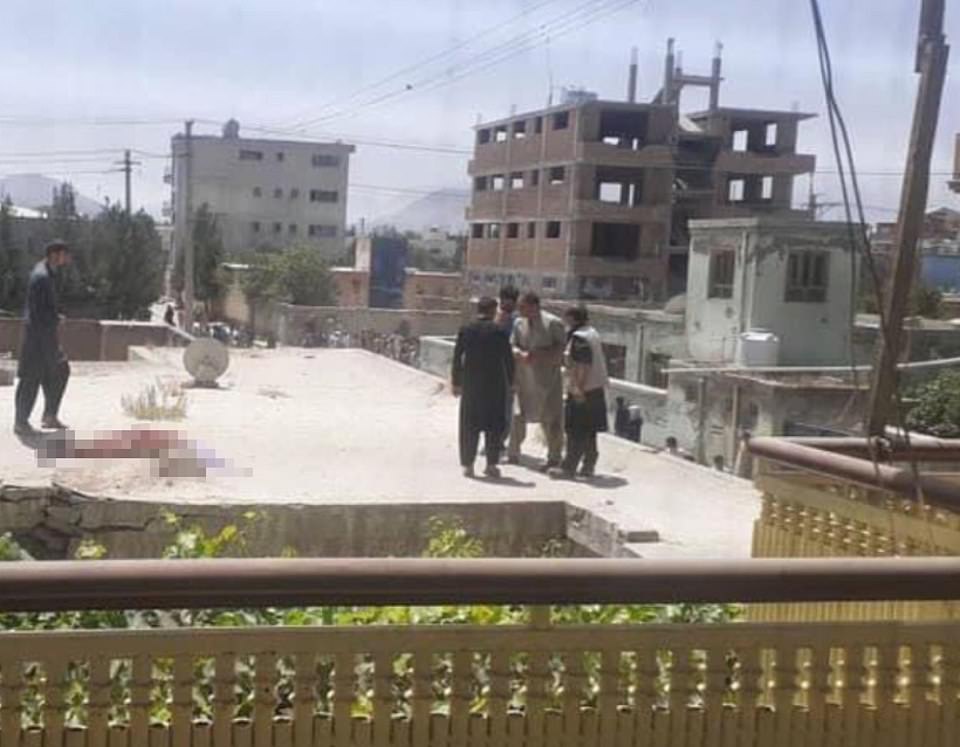 Video posted later appeared to show residents collecting the bodies of three stowaways, who reportedly fell from an airborne plane, from a roof in Kabul 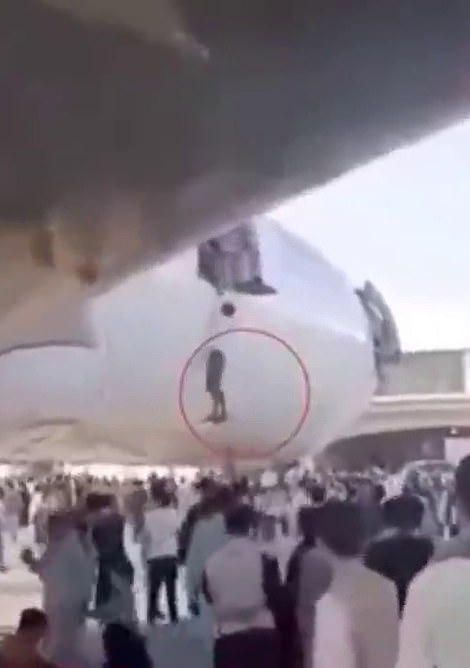 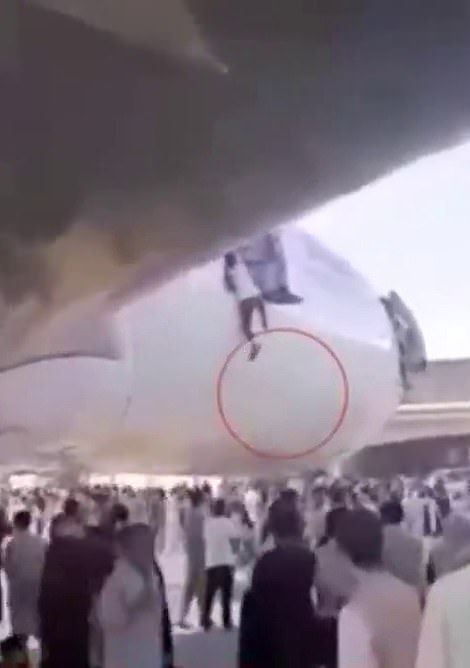 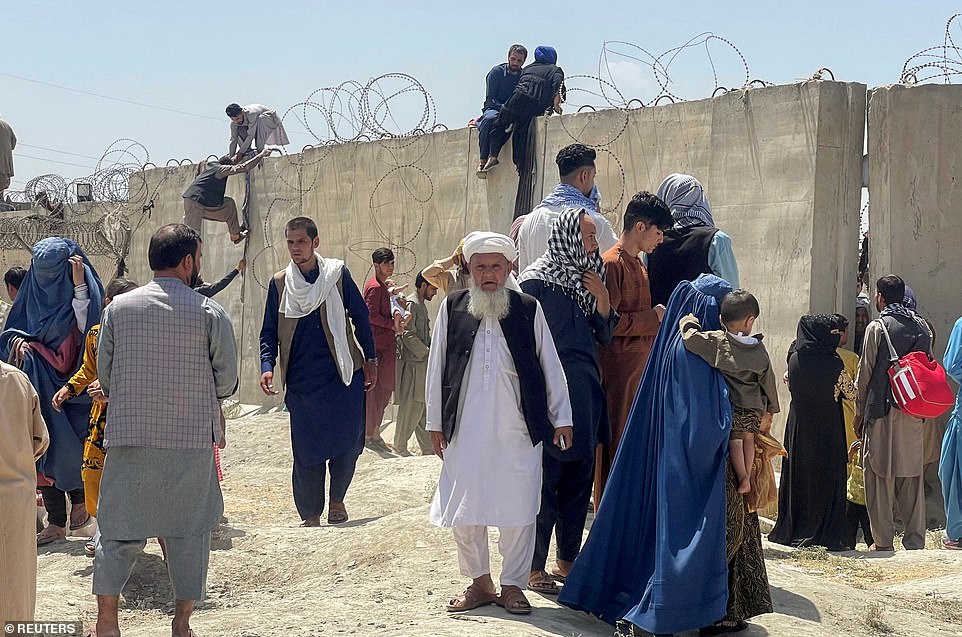 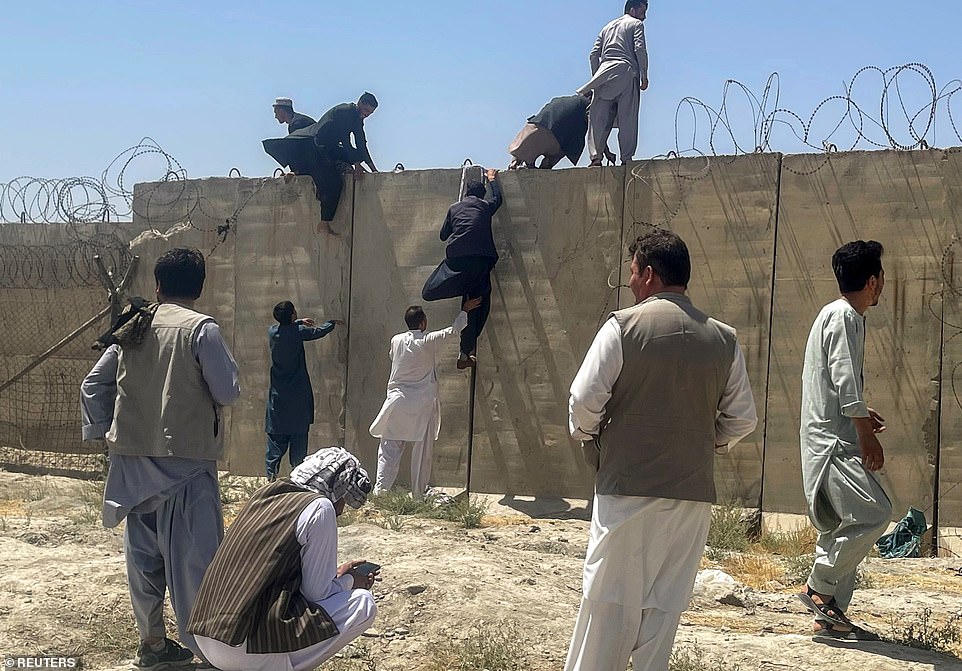 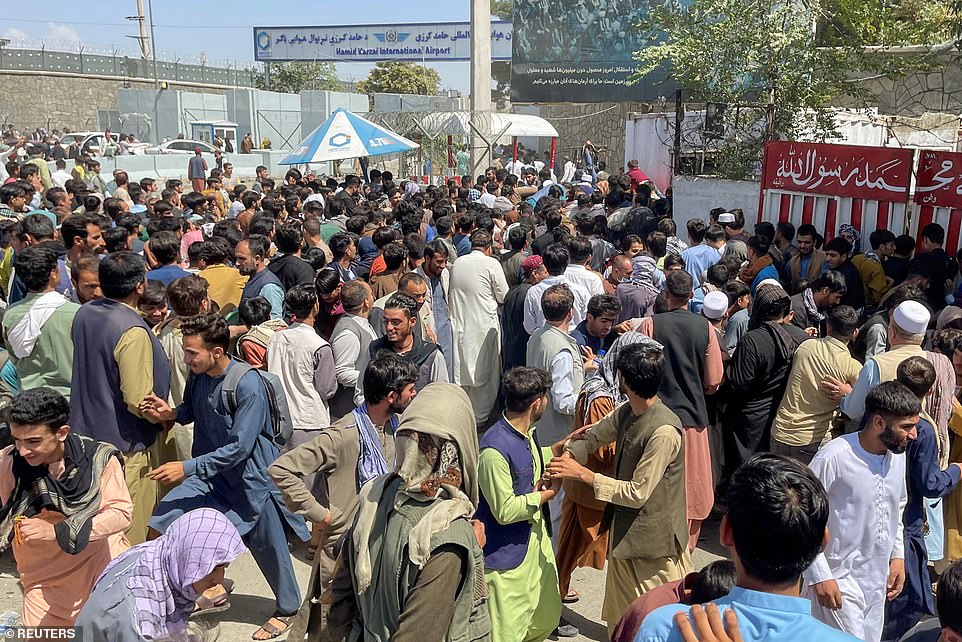 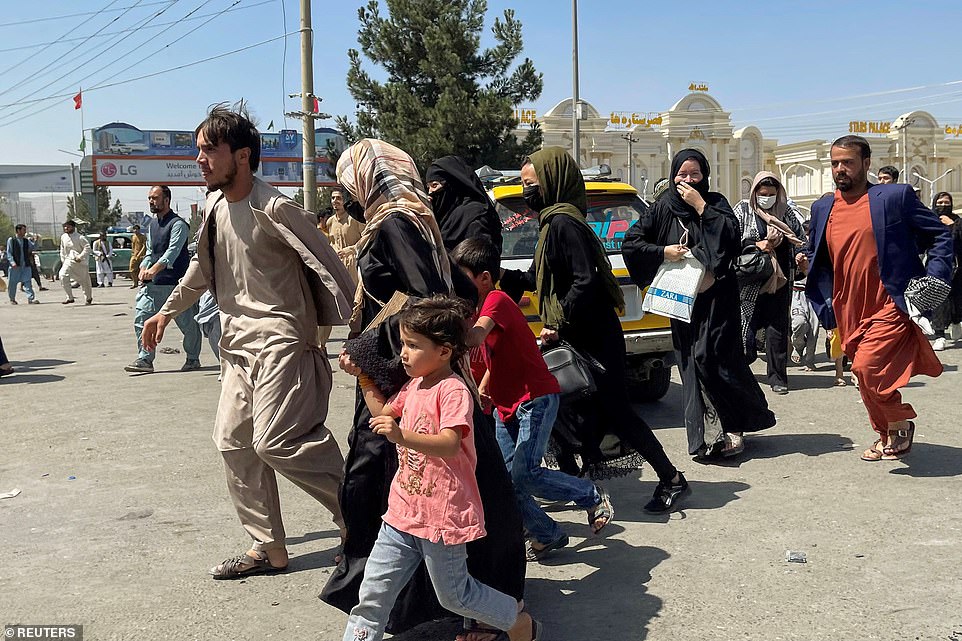 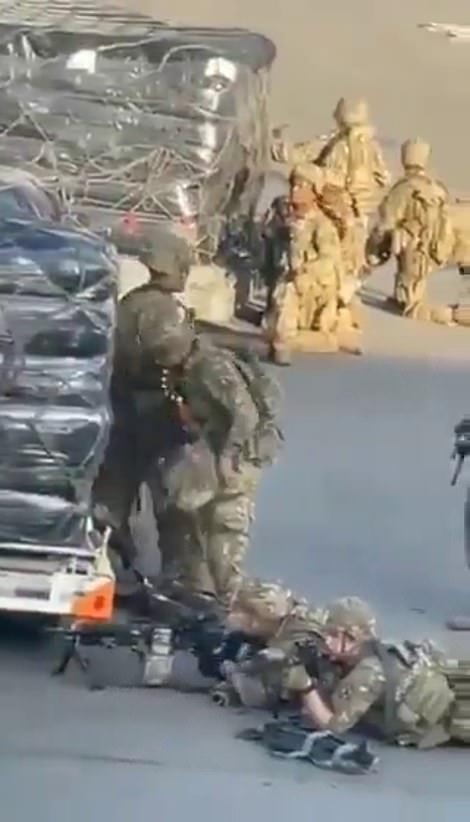 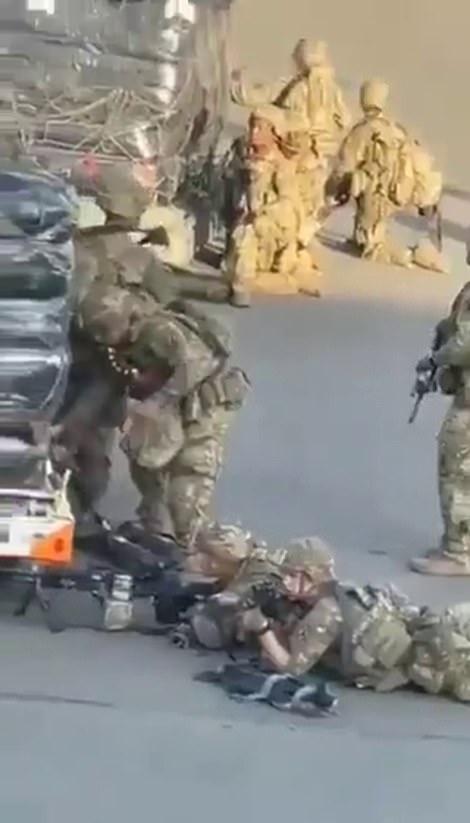 US troops are guarding the airport and have taken over air traffic control, but all non-military flights are grounded. Soldiers fired warning shots in the air to prevent hundreds of civilians running onto the tarmac, a US official said 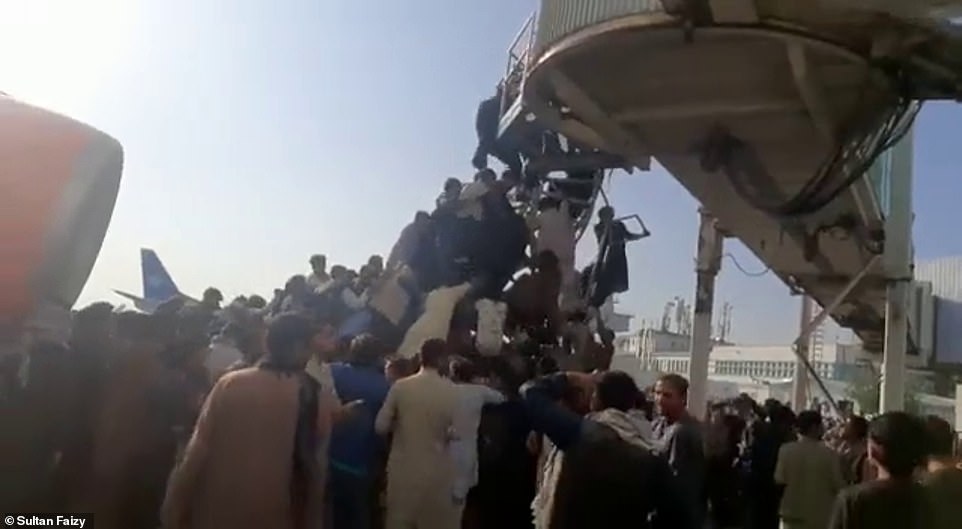 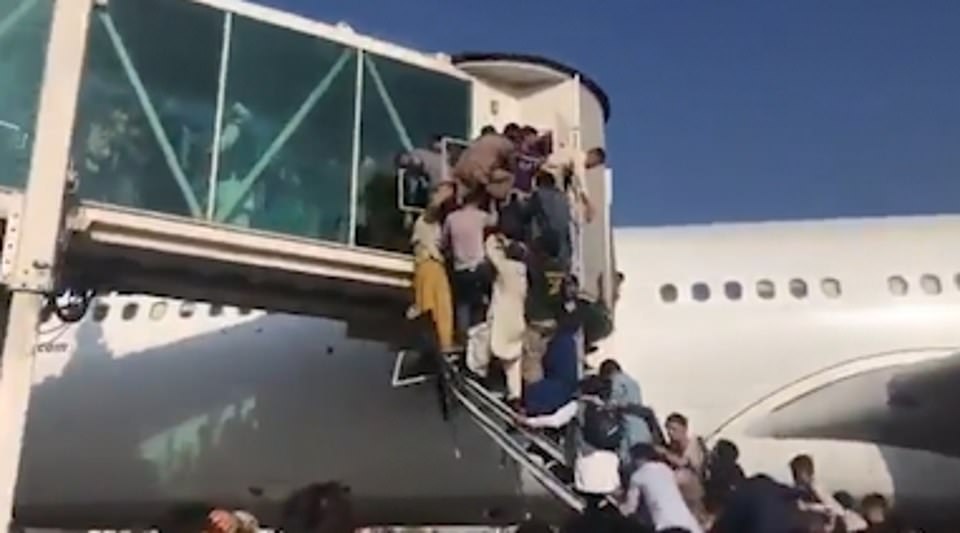 At least five people have been killed at Kabul airport as thousands of people tried desperately to get on flights out of Afghanistan amid increasingly chaotic scenes. Witnesses said it was not clear whether the victims were killed by gunshots or in a stampede 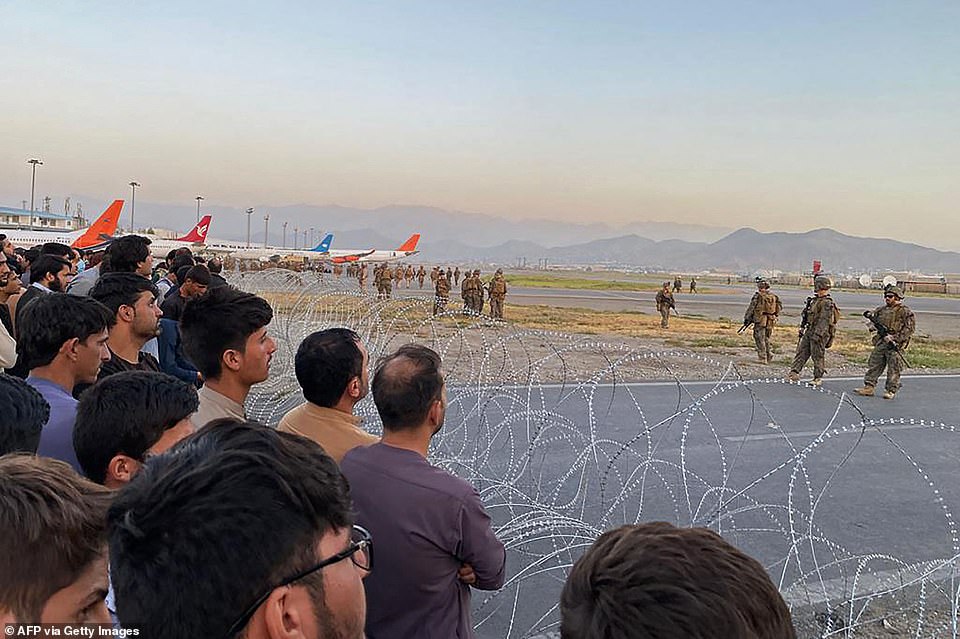 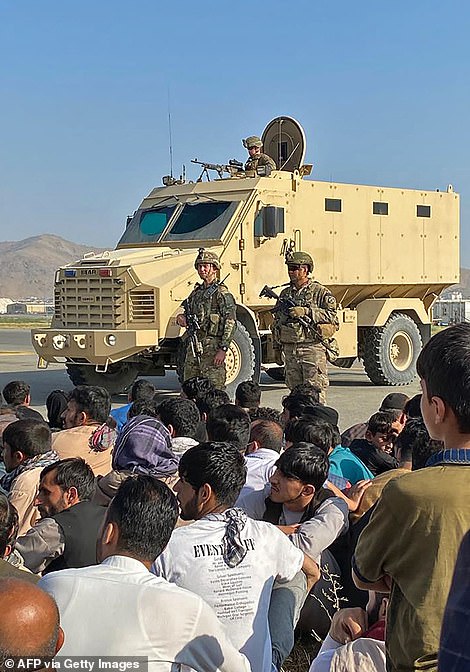 US troops are guarding the airport and have taken over air traffic control, but all non-military flights are grounded. Early Monday morning, flight-tracking data showed no immediate commercial flights over the country even as thousands of Afghans flooded Kabul airport 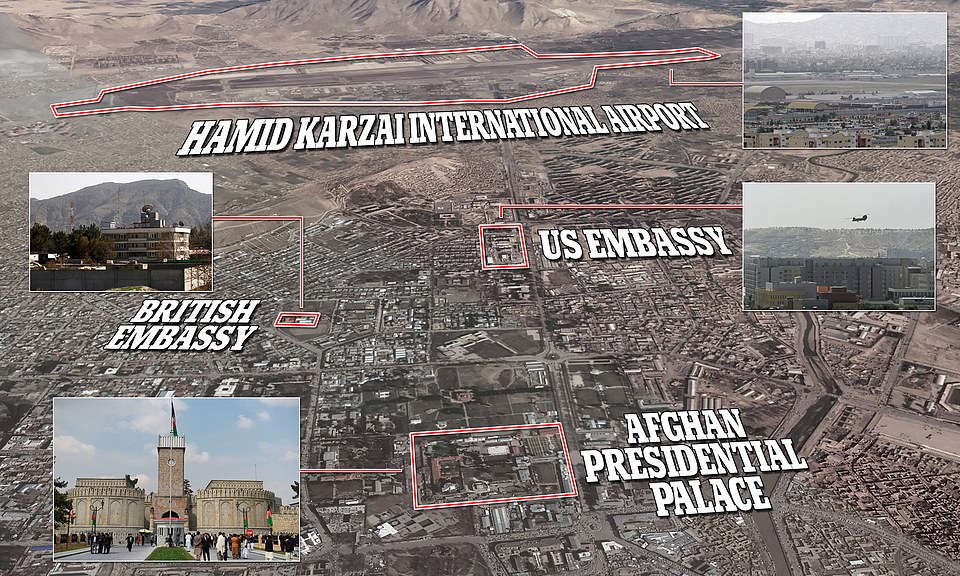 The US Embassy has been evacuated and the American flag lowered, with diplomats relocating to the airport in scenes reminiscent of the evacuation of the embassy of Saigon in 1975. Other Western countries have also closed their missions and are flying out staff and civilians after the Taliban walked into Kabul’s presidential palace

In a stunning rout, the Taliban seized nearly all of Afghanistan in just over a week, despite the billions of dollars spent by the US and NATO over nearly two decades to build up Afghan security forces