Biden’s words haunt him: President said a month ago there’s ‘no circumstance where Americans will be lifted out of the U.S. embassy in Kabul by helicopter’

In the call, members of Congress were briefed by Austin, US Secretary of State Antony Blinken and Army Gen. Mark Milley, the chairman of the Joint Chiefs of Staff, on the alarming state of affairs in Afghanistan.

Top officials worry that not only were the 20 years the US spent in Afghanistan since 9/11 in vain, but that the Taliban now have access to the modern war equipment and weapons the US provided the Afghan army with, as the 20th anniversary of the ?September 2001 terror attacks on New York, Washington DC and Pennsylvania approach.

The Taliban have taken over vast swathes of Afghanistan in just days, seizing high tech US equipment including Humvees, Black Hawk Helicopters and weaponry – although officials believe much of the technology is too sophisticated for Taliban members to know how to operate.

‘You can’t buy willpower, and you can’t buy leadership,’ Austin allegedly said in the call. 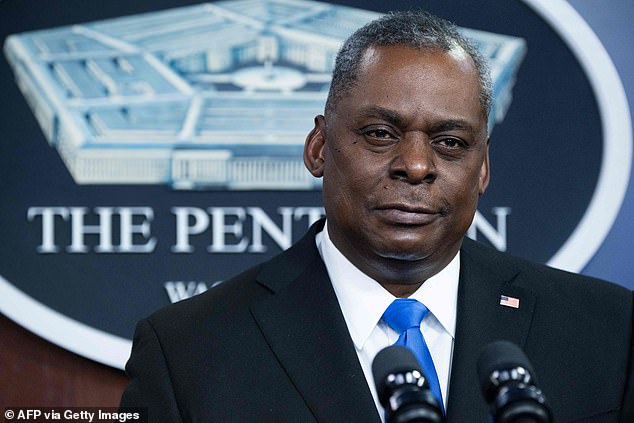 Secretary of Defense Lloyd Austin (pictured) was ‘beyond disappointed’ and said that ‘you can’t buy willpower’ in a call with members of the government today, a source said 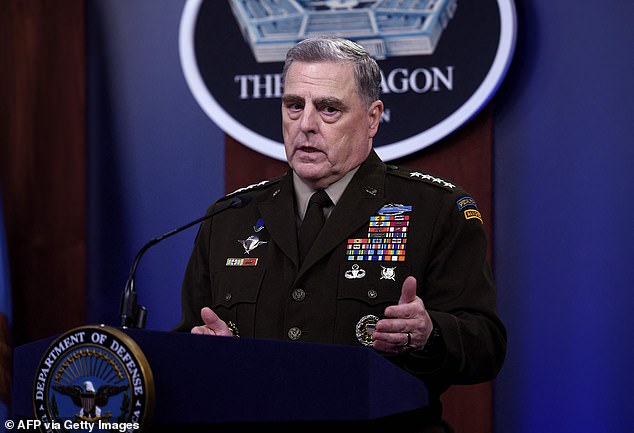 Army Gen. Mark Milley, the chairman of the Joint Chiefs of Staff was also in the call briefing Congress members 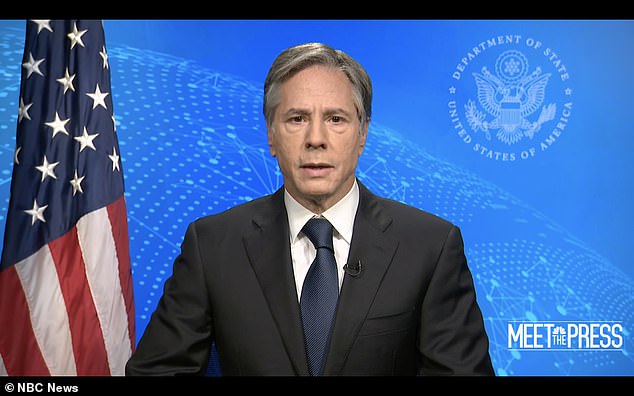 Antony Blinken has rejected comparisons between Afghanistan and Saigon, blaming the ‘inability of Afghan security forces’

Republicans are placing the blame on President Biden’s approach. Indiana Representative Jim Banks, who served in Afghanistan, said Biden was ‘sleep at the wheel’ and that his administration had been ‘caught unprepared.’

Biden has also received backlash for retreating to Camp David for the weekend, as the Taliban entered Kabul on Sunday.

‘Why is Joe Biden on vacation? I don’t think he’s taken one question from the press this entire weekend, so this is a frightening situation,’ asked Ohio Representative Jim Jordan.

Subsequently, Biden seemed to blame Trump for setting a May 1 deadline to withdraw troops from Afghanistan, leaving the Taliban ‘in its strongest position since 2001.’

House Majority Leader Rep. Steny Hoyer issued an statement drawing attention to the dire circumstances for those who have not been evacuated from Afghanistan.

‘There will be much analysis of our Afghanistan experience, but right now, I am gravely concerned for the safety of our Afghan partners who served side-by-side with our troops, our diplomats, our development professionals, and our partner forces to carry out our mission,’ Hoyer said.

Taliban fighters stormed the ancient palace on Sunday and demanded a ‘peaceful transfer of power’ as Kabul descended into chaos, with US helicopters evacuating diplomats from the embassy.

US-backed Afghan President Ashraf Ghani fled the country for Tajikistan, effectively ceding power to the Taliban in a move signaling the end of the 20-year Western intervention begun after the September 11 attacks, while thousands of Afghan nationals rushed to the Pakistan border.

Foreigners in Kabul were told to either leave or register their presence with Taliban administrators, while RAF planes were scrambled to evacuate 6,000 British diplomats, citizens and Afghan translators, and the British Ambassador was moved to a safe place.

The US and French Ambassadors have already been evacuated as the US rushes to rescue more than 10,000 of its citizens.

Chairman of the Joint Chiefs of Staff General Mark Milley told a bipartisan group of senators during a Sunday call that a past assessment of how soon the terrorist groups will reemerge in Afghanistan will drastically speed up due to the events over the last week.

On the call with Milley, Defense Secretary Lloyd Austin and Secretary of State Antony Blinken, Republican Senator Lindsey Graham asked if they will revise the assessment given to Congress in June that classified a ‘medium’ risk of terrorist group reconstituting within two years of withdrawal.

‘Yes,’ Milley responded about changing the threat assessment report, according to Axios.

He also said he would be more than willing to brief senators in a classified setting on the unfolding Afghanistan situation.

The bipartisan group of senators on the call pressed Milley and Austin on efforts to get U.S. personnel out of Afghanistan as images already emerged of a helicopter evacuation from the U.S. Embassy in Kabul – reminiscent of the fall of Saigon.

A source on the call said, according to Axios, that there is no way the U.S. can evacuate the more than 20,000 Afghans who want to escape the country by August 31.

‘Two takeaways for me – We’re gonna leave tens of thousands of people behind… and the timeline in terms of threats has accelerated,’ the source said.

The original reason the U.S. engaged in Afghanistan in 2001 was to prevent terrorist threats to the homeland from the Middle Eastern nation.

It is now feared the power vacuum set to be filled by the Taliban could lead to a resurgence for terror group Al Qaeda, and see further attacks against western targets.

After 20 years, and billions of dollars spent, President Joe Biden’s total troop withdrawal left the region in disarray as the Taliban was able to overtake a majority of Afghanistan in just over a week.

The Islamic militant forces breached the capital city of Kabul on Sunday as the U.S. flag was removed from the embassy there and American citizens were told to shelter in place as gunfire broke out at the airport. Afghani President Ashraf Ghani fled the country as the Taliban entered Kabul.

By Sunday, the Taliban garnered almost complete control by over taking 28 of Afghanistan’s 34 provinces. 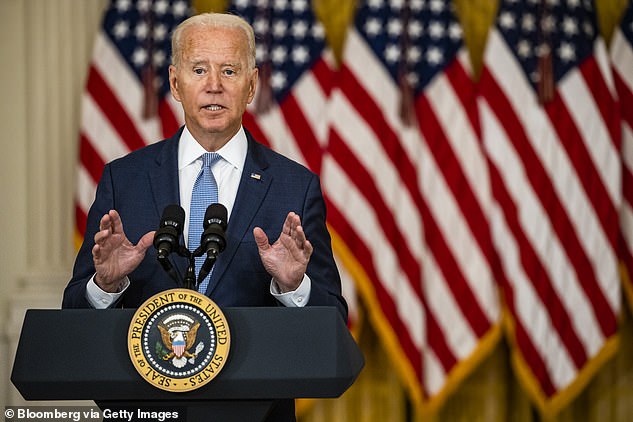 Subsequently, Biden seemed to blame Trump for setting a May 1 deadline to withdraw troops from Afghanistan, leaving the Taliban ‘in its strongest position since 2001’ 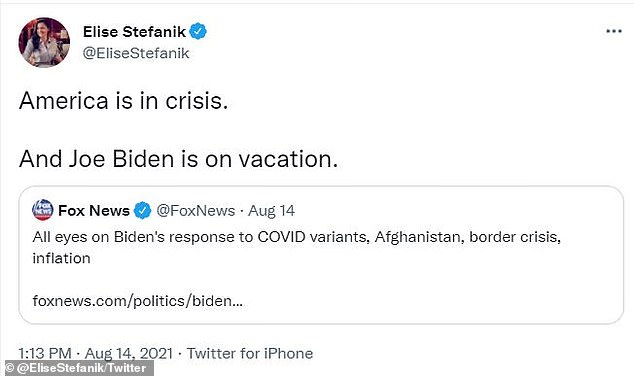 Biden’s administration came under scrutiny. President Biden spent the weekend at Camp David, as the Taliban entered Kabul on Sunday

‘We should inflict pain on them’: Pompeo issues fiery call for Biden to unleash airstrikes on Taliban surrounding Kabul and says the extremist group would not ‘run wild and free’ if Trump was still in office