Vladimir Putin laughs off Joe Biden’s claim he’s a ‘killer’ (but fails to deny it) and dismisses the US president as a ‘career politician’ while praising Donald Trump as ‘extraordinary, talented and colorful’

Vladimir Putin burst into laugher when asked if he is a killer – and heaped praise on Donald Trump, before branding Joe Biden a career politician.

The Russian president guffawed when NBC correspondent Keir Simmons asked him: ‘Mr President, are you a killer?’ during an interview broadcast Friday night.

‘So as far as harsh rhetoric I think this is an overall expression of US culture. Of course in Hollywood, there are some underlying deep things in Hollywood – macho, which can be treated as cinematic art. But that’s part of US political culture, it’s considered normal. By the way, not here, it is not considered normal here.’

Putin was speaking in Moscow ahead of his June 16 meeting with President Biden in Geneva. Biden said earlier this year he believed his Russian counterpart was a killer, while Donald Trump did not give a direct answer when asked the same question during his time in office.

Simmons pushed Putin further on the matter, saying: ‘I don’t think I heard you answer the question, a direct question, Mr President.’

Putin – who appeared to bristle at being pushed further, said: ‘I did answer, I did answer. I’ll add if you let me. I’ve heard dozens of such accusations, especially a period of some great events during our counter terrorism events in northern caucuses.

‘When that happens, I’m always guided by the interests of the Russian people. The Russian state. In sentience of terms of who calls somebody who, in terms of labels, this is not something I worry about in the least.’

Vladimir Putin spoke to NBC News on Friday, ahead of his meeting with Joe Biden in Geneva on Wednesday. He laughed when asked about Biden’s March description of him as a ‘killer’Putin is seen speaking to Keir Simmons of NBC News on Friday. He said relations between the United States and Russia were at their lowest level in years

Simmons then reeled off a list of names of Putin critics who died in murky circumstances.

They included Alexander Litvinenko, killed by radiation poisoning in London in 2006, and Mikhail Lesin, who was murdered in Washington DC in 2015.

Putin, a former KGB lieutenant colonel, said: ‘Look, you know, I don’t want to come across as being rude, but this looks like some kind of indigestion except that it’s verbal indigestion. You’ve mentioned many individuals who indeed suffered and perished at different points in time for various reasons, at the hands of different individuals.’

Speaking of Lesin, he added: ‘I regret to this day he is not with us – we found some of the other criminals who committed these crimes. They are in prison.

Meanwhile, Putin used the same interview to hail Donald Trump, while offering more lukewarm praise – and a backhanded compliment – when asked to share his thoughts on Joe Biden.

‘He is a colorful individual. You may like him or not.

‘And, but he didn’t come from the U.S. establishment. He had not been part of big-time politics before, and some like it, some don’t like it but that is a fact.’

On the current president, Putin said: ‘(Biden) is radically different from Trump because President Biden is a career man. He has spent virtually his entire adulthood in politics.’

Putin added: ‘That’s a different kind of person, and it is my great hope that, yes, there are some advantages, some disadvantages, but there will not be any impulse-based movements on behalf of the sitting U.S. president.’

Trump was dogged by accusations of his being too cozy to Russia, and in awe of their strongman leader.

Donald Trump is seen with Putin, being given a soccer ball in July 2018, the day after the World Cup final was held in Moscow 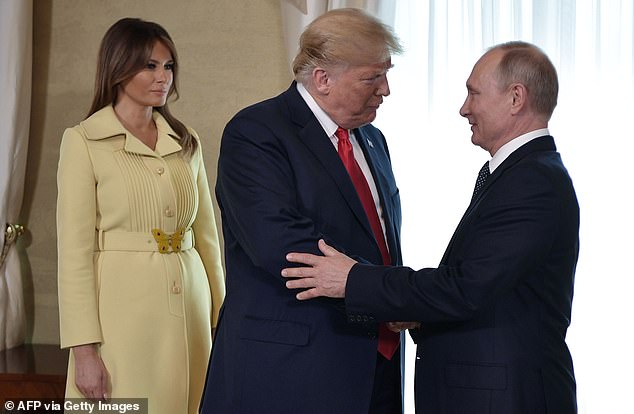 Putin and Biden will meet in Geneva on Wednesday.

The White House has said Biden will bring up ransomware attacks emanating from Russia, Moscow’s aggression against Ukraine, the jailing of dissidents and other issues that have irritated the relationship.

Last year Biden told his biographer, Evan Osnos, about meeting Putin in the Kremlin in 2011.

OPINION: We invite your written comments below.